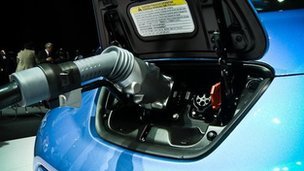 The EV Van subsidy scheme, which was first announced last month, means buyers can get 20% off the cost price of a new vehicle, up to a maximum of £8,000. This scheme is actually an extension of the plug-in grant launched for ordinary domestic cars last year.

Under that scheme anyone buying from a list of eligible vehicles (they have to meet a list of criteria for safety, range and low emissions) can get up to £5,000 off the showroom price.

Yet despite the deal, take-up has been slow. Government figures show there were just 892 applications made for the plug-in grant in 2011, despite the fact that several big manufacturers launched new, electric models for the first time. The bulk of those applications also came in the first quarter of the year, with the figure tailing off to just 106 for the final three months.

The UK government is determined to fund electric motoring for at least another three years, as part of its plan to meet ambitious emissions targets.  “Our new grant demonstrates that you can be a motorist and still be pro-environment,” says Transport Secretary Justine Greening.

“The new plug-in grant also makes business sense as it’s been estimated that a small electric van will typically cost £100 less in fuel for every 1,000 miles driven compared to a diesel equivalent.”

It is not just the grant either. If you drive an electric vehicle you can benefit from zero-rate company car tax and you won’t pay the congestion charge in London.

There are plenty in the industry that believe electric motoring is currently more suited to business use than to domestic use. Think of all those white vans dashing around your town or city. They will cover no more than 100 miles in a day (that’s the rough range of an electric van), and the companies don’t use them at night, so it is easy to plug them in at the depot ready for the next day.

How Tesla Model 3 Is Changing The US Used Car Game

Volkswagen to invest €15 billion in advanced powertrains over next 5...