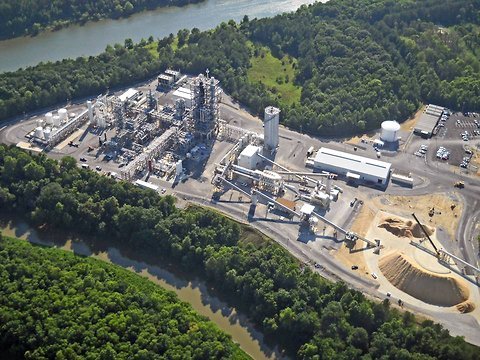 The New York Times reports on kiOR, a Texas company producing crude oil from wood chip at a plant in Mississippi.

The Times reports ” In a conference call with investment analysts, company executives would not say just how much they had made at the conversion plant, in Columbus, Miss., or how well it was running. But they said the remaining step, refining the oil into products, would involve standard technology.

They said they had already accomplished the hard part, developing a proprietary technology that involves rearranging the molecules of biomass into an oil in a matter of moments. In nature, it takes millions of years.

If the oil from low-value wood chips is refined into products like gasoline and diesel, which are expensive and heavily supported by government policy, that would be a major milestone in the history of renewable energy. This kind of renewable energy, generally known as cellulosic biofuel because it comes from woody, nonedible sources, has lagged behind areas like solar cells and wind turbines.

Yet even when solar and wind power work well, they mostly serve as a substitute for natural gas, which is quite cheap at the moment. Renewable substitutes for natural gas do not replace imports from unstable places like the Persian Gulf, as the biofuel would.

But details on any challenges faced by the $200 million plant were not forthcoming. Fred Cannon, the company’s president and chief executive, said KiOR had “experienced normal start-up issues” but that they did not involve its proprietary process.

KiOR shreds the wood, mainly Southern yellow pine, into small particles and mixes it with a powdered catalyst under very mild pressure, about 25 pounds per square inch. For the plant to be a commercial success, it will have to achieve steady operations and a high yield of product per ton of biomass, two areas that Mr. Cannon said the company was making progress in.

The plant aims to turn out 13 million gallons of fuel a year and has already lined up customers, it said.

The plant needs certification from the Environmental Protection Agency before it can generate renewable energy credits for gasoline, which it can then sell to refineries and others that are obligated to use renewable fuel. Those sales would help offset its production costs.”

Welcome to 2013: Our take on trends that will drive electric...