National Grid’s chief executive has promised to examine how electricity is prioritised in the event of shortages, after the company came under severe criticism for shutting off the supply to critical UK infrastructure after last Friday’s massive power cut.

John Pettigrew, chief executive of National Grid, has spoken out for the first time since the power cuts, which caused disruption to nearly 1m homes and businesses in large parts of England and Wales, including London.

Writing on his personal LinkedIn page on Monday, Mr Pettigrew said one of the areas that would be examined in the aftermath of the event was “whether the system as it is currently designed prioritises power supplies in the right way”.

National Grid’s director of operations Duncan Burt said he did not believe that a cyber-attack or unpredictable wind power generation was to blame.

He said the near-simultaneous loss of two generators was more than the grid was routinely prepared for, prompting automatic safety systems to shut off power to some places.

“We think that worked well; we think the safety protection systems across the industry, on generators and on the network, worked well to secure and keep the grid safe, to make sure that we preserved power to the vast proportion of the country,” he said.

What is the real reason for the power loss?

At this time there are of course countless investigations underway. These will most likely all prove virtually useless and ignore the real issues.

The UK has been operating with very little room for disruption as the the supply side is only just above the demand level. As this gap shrinks the risk of grid failure increases as the potential to replace a lost generator reduces. 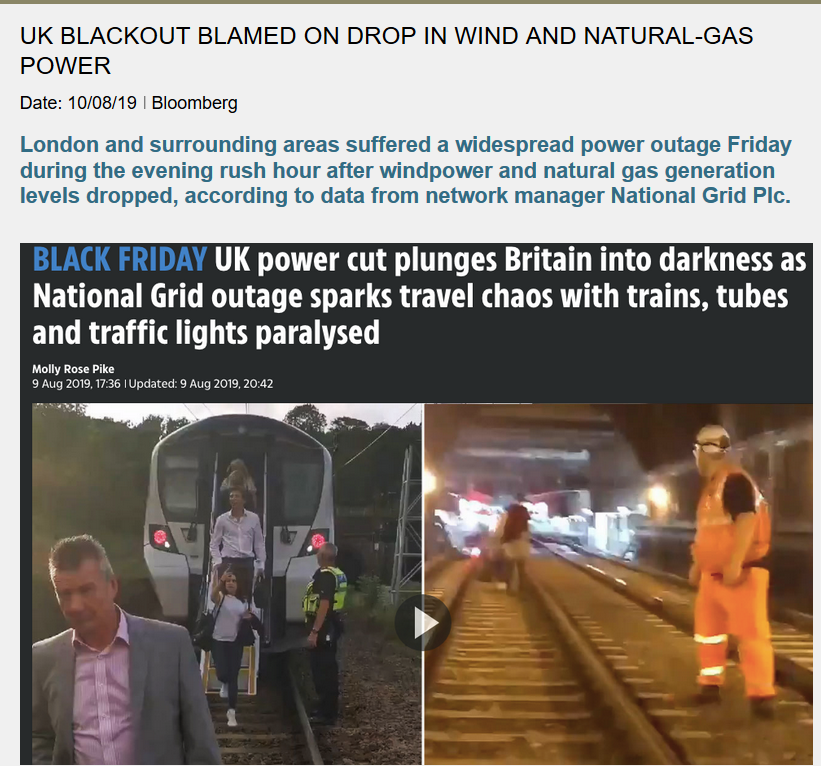 We do know that a major offshore wind generation site and a gas turbine failed at the same time. The remaining generators did not have enough spare capacity to take up the slack. This caused Power Cuts across the UK.

It seems as if the Wind Generated power suffered a sudden drop in output as this chart shows.

As coal fired plants have been closed to curb our CO2 gas emissions we have routinely been told that Wind and Solar are taking up the slack. This is just not true as demonstrated by how close the capacity and demand lines are. We need more gas fuelled power stations to rectify this imbalance. Gas power stations, unlike Wind or Solar  can quickly ramp up electricity generation to more closely match demand. Wind farms are limited by the power of the prevailing wind and solar in the UK relies more on how well God is feeling than much else and is certainly less beneficial at night than in the day.

The real reason has to stem from our Governments lack of understanding on the consequences in closing Coal fired power stations and thinking that off shore wind is the answer. We know that the delta between demand and production has been tight for a few years now. As the delta reduces the risk of a significant event has to increase as the spare capacity shrinks.

The Government reluctance to build Gas Power generating stations and push for Shale Gas is woeful.

We need reliable power generation, a smart grid and more battery capacity.  What better that bringing on-line the hundreds of thousands of EV in the country. We need to ramp up the Car to Grid schemes such as OVO, Otopus and others are planing.

Not a Lot of People Know That