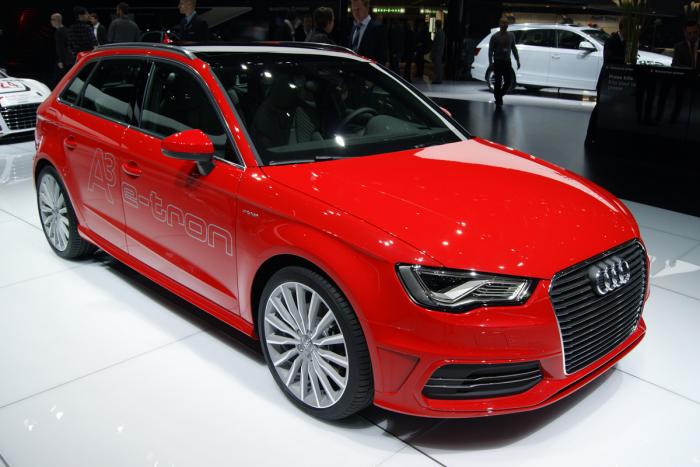 Audi has revealed the A3 e-tron, a plug-in hybrid concept. Production is now expected in 2014.

Despite its concept label, Audi has already expressed an interest in having an e-tron badged model in every segment and has said that the A3 e-tron provides “a realistic glimpse in to the future of mobility as Audi is planning it”.

Power comes from a combination of 1.4-litre TFSI engine and electric motor. Together, the two power sources produce 201bhp and 350Nm of torque. Those figures are good enough to make the A3 e-tron the most powerful model in the line-up.

All drive is delivered through a six-speed e-S tronic gearbox to the front wheels, allowing for a 0-62mph time of 7.6 seconds and a top speed of 138mph. The extra weight of the battery pack and electric motor means that despite being the most powerful A3 in the current range, it’s actually half-a-second slower from 0-62mph than the 1.8 TFSI car.

This car is not about power but more about efficiency. Audi claims that the A3 e-tron is capable of 188.3mpg and emits just 35g/km of CO2, which is far better than the next most efficient and still exceptional model – the 74.3mpg 1.6 TDI.

Drivers can select between three different driving modes: the engine alone, the electric motor alone or a combination of the two. In electric-only mode, the e-tron can be driven at speeds of up to 81mph and has a maximum range of 31 miles.

A 31-mile all-electric range, electric assistance and a de-coupled ‘gliding’ mode all facilitate combined economy of over 150 mpg–albeit on the more optimistic European fuel cycle. An EPA figure in the low hundreds is more likely.

In the US Audi hasn’t yet confirmed an exact date for e-Tron sales, but early 2014 is expected. The model will go on sale alongside the A3 Sedan, also unveiled at the New York motor show.