The June report from Cambridge claims that by 2030 the UK could require an additional 7 million hectares of land to meet the demands for food and renewable energy. The report is titled “The best use of UK agricultural land”, produced by the University of Cambridge’s Institute for Sustainability Leadership (CISL). 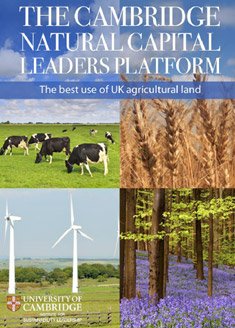 This represents more than 35% of the UK’s existing agricultural land, and compares with up to 5 million hectares that might be released from a range of potential supply side initiatives.

The report, The Best Use of UK Agricultural Land, was produced by the Cambridge-hosted Natural Capital Leaders Platform in collaboration with Asda, Sainsbury’s, Nestlé, BOCM PAULS, AB Agri, Yara, BASF, and Volac, as well as the National Farmers’ Union (NFU) and the Country Land and Business Association. The aim was to understand the amount of additional land needed, and provide a simple, clear vision for UK agricultural land use alongside a set of principles to guide future decision-making.

Andrew Montague-Fuller, Programme Manager at CISL, and author of the report said: “In this initial analysis, we identified a significant gap between additional land demand and potential supply, as well as a worrying lack of clarity about what agricultural land is expected to deliver. It is clear that more research is needed, and that business, government, farmers, and landowners need to work together to ensure we can meet these growing demands, while also protecting the environment.”

The report quantifies a number of ‘supply-side’ measures that could help to meet additional demand, including improving yields and reducing food waste, while highlighting the need to understand how much land can be used for multiple purposes. But it warns that these initiatives may not be sufficient to close the gap, in which case difficult choices will need to be made.

The report identifies that the UK has a problem, demand for land is far greater than that available. Various scenarios are considered but in the best case we will be 0.9 million hectares short of the land needed to support a predicted population of 70 million by 2030. In the worst case scenario we might be short by 6 million hectares. The lack of land on our small island nation will mean that we need to make tough choices so we can get the maximum from our 18 million hectares of farmland.