The Economist just published an article on Electric Vehicle adoption and the impact on the recent oil price reductions.

The article is titled –

“FILLING the tank is one of the more painful aspects of modern motoring as numbers whirr on the pump at wallet-draining speed. The falling price of oil has at least brought some relief to drivers. Indeed, it is widely assumed that tumbling oil prices will put a dent in the sales of electric cars, as internal combustion engines become increasingly cheap to run. Even carmakers such as BMW have admitted that they fear their battery-powered vehicles will take a hit. But for buyers of electric cars, the relative cost of refuelling is in fact a minor consideration. And the popularity of electric cars in the years to come will depend much more on improvements to their performance than on the oil price. ” 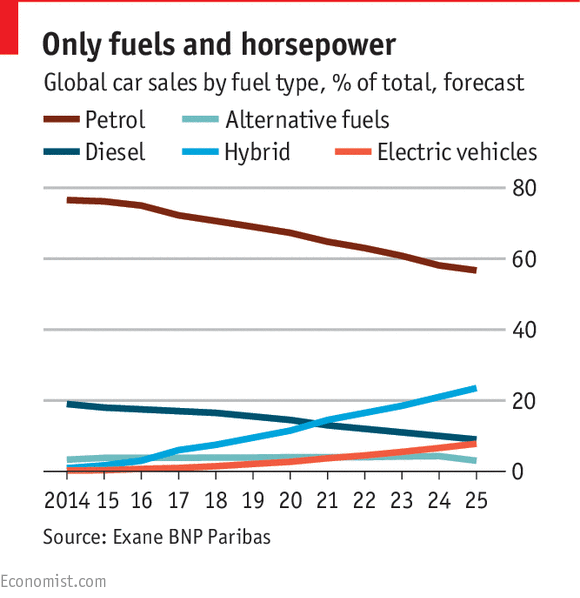 The article goes on to point out that Electric vehicles represent less than one million of the planets billion vehicles. They are not sold on price as none of them are at the low-end of the market and the Tesla towards the top end with a £60K model S. The best-selling Nissan Leaf is still far more expensive than a basic petrol engined Nisan car.

For sales to ramp prices need to fall and fall more than basic economics of scale from greater production volumes. In a Leaf the battery pack represents around half of the cost of the car.  As better and more efficient battery packs are produced the cars selling prices can become more reasonable.  This is the driving force behind Tesla’s Mega Factor now taking shape in the Nevada desert. If the price of the pack falls by 20% that accounts for a 10% reduction is total cost of the car.

The summary is that the developing EV industry faces many challenges and the success depends on overcoming these challenges but that low fuel price is not one of them,