If you check out the Economist’s website site and read the Editor’s pick you will see a good article on the growing adoption of Electric Cars.

The post mentions the constant updating of the rise of the EV and that estimates are being ramped upwards as this graph shows.

One car in a hundred sold today is powered by electricity. The proportion of EVs on the world’s roads is still well below 1%. Most forecasters had reckoned that by 2025 that would rise to around 4%. Those estimates are undergoing a big overhaul as carmakers announce huge expansions in their production of EVs. Morgan Stanley, a bank, now says that by 2025 EV sales will hit 7m a year and make up 7% of vehicles on the road. Exane BNP Paribas, another bank, reckons that it could be more like 11% (see chart). But as carmakers plan for ever more battery power, even these figures could quickly seem too low.

Ford’s boss is bolder still. In January Mark Fields announced that the “era of the electric vehicle is dawning”, and he reckons that the number of models of EVs will exceed pure ICE-powered cars within 15 years. Ford has promised 13 new electrified cars in the next five years. Others are making bigger commitments. Volkswagen, the world’s biggest carmaker, said last year that it would begin a product blitz in 2020 and launch 30 new battery-powered models by 2025, when EVs will account for up to a quarter of its sales. Daimler, a German rival, also recently set an ambitious target of up to a fifth of sales by the same date.

The falling cost of batteries will make the cost of owning and running an EV the same as that of a traditionally powered car in Europe by the early 2020s, even without the hefty government subsidies that many rich countries use to sweeten the deal. Better batteries should also conquer “range anxiety”—most pure EVs, like the Nissan LEAF run out of juice after around 100 miles (161km). If battery costs continue to tumble and performance improves at the current rate, the price of a car with a range of 300 miles could hit $30,000 by the early 2020s, according to Exane BNP Paribas. Slicker technology will also mean charging in minutes, not hours.

The lack of charging infrastructure still deters buyers, but signs of growth are encouraging. In most rich countries governments, carmakers and private companies are putting up the necessary cash. In America the number of charging points grew by more than a quarter to almost 40,000 in 2016. Even Shell and Total, are planning to put chargers on the forecourts of their petrol stations across Europe.

But EVs are not yet a profitable business for carmakers precisely because of their batteries. Chevrolet’s Bolt, on sale late last year, costs under $30,000 with subsidies and travels 238 miles between charges. But each sale will reportedly set General Motors back $9,000. Tesla’s rival, the Model 3, is set to go on sale later this year; the firm has yet to make an annual profit. Even Renault-Nissan, the world’s biggest EV manufacturer, loses money on electric models.

Renault Nissan to provide EVs for UN’s COP22 in Marrakech 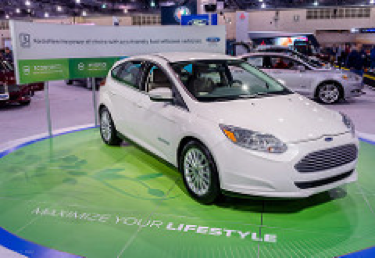