Maria Sharapova made a spectacular entrance to the WTA pre-Wimbledon Party last night, arriving in a Porsche 918 Spyder hybrid supercar driven by the former Formula One driver Mark Webber.

Webber was fresh from his exploits in the 2014 Le Mans 24 Hours race, where he drove a Porsche 919 Hybrid. Sharapova will be hoping for success at Wimbledon, the third Grand Slam tournament of the year, which starts on Monday 23 June. 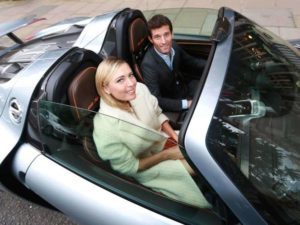 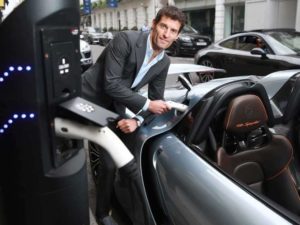 Sharapova is quite the Porsche fan it seems, waxing lyrical about the 918 after walking up the red carpet:

‘What a fantastic way to arrive at the party. To be in the fastest Porsche with a racing driver like Mark is amazing. And it’s great too to be driving in a city like London running only on electric power – the 918 Spyder is an unbelievable car!’

When that V8 and the twin electric motors are all working in sync, it means the 918 Spyder puts out 877hp. This, combined with the car’s electrically assisted four-wheel drive, means the posh Porsche can sprint from 0-62mph in a frankly ridiculous 2.6 seconds and romp on to a top speed of 211mph.

The Porsche 918 Spyder is, however, also a car that allows you to have your cake and eat it. Its ability to run on electric power alone and to use the motors to assist the petrol engine where possible, means that the 918 Spyder has an average fuel consumption statistic of 94.2mpg combined, according to Porsche

That 70g/km CO2 figure equates to zero road tax and congestion charge exemption. Being a plug-in hybrid it can be ‘pre-charged’ too. Here’s Webber showing us how.

Unfortunately for Webber, at this year’s Le Mans he had to experience his 919 Hybrid on electric power alone – and not for good reasons.

Owing to an engine problem, the Australian’s car had to limp back to the pits using just the hybrid system’s battery pack and electric motors. Webber and Porsche had been leading the race at the time, but the mechanical problem scuppered any chance of a fairytale return.