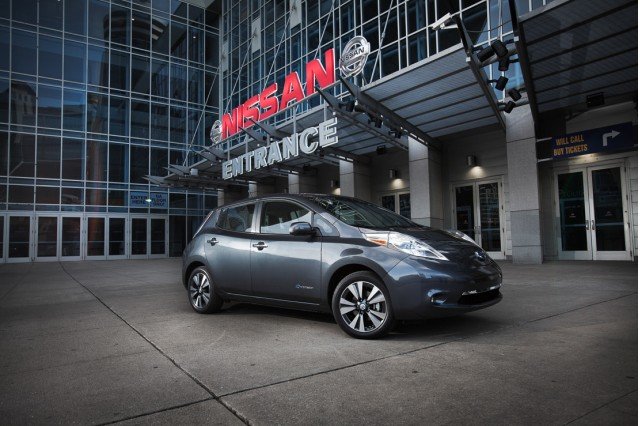 In its third year on the United States market, the updated 2013 Nissan Leaf will have a slightly longer range, a new and lower-priced base model, faster charging, and a more efficient cabin heater.

The 2013 Leaf is scheduled to enter production at Nissan’s assembly plant in Smyrna, Tennessee, this week.

While the 2013 Leaf is still being tested to determine its EPA range rating, Nissan says that range higher than the 2012 model’s 73 miles is “expected.”

The higher range comes not from a larger battery –the lithium-ion pack remains at 24 kilowatt-hours–but from improvements to aerodynamics, regenerative braking, and energy management. Nissan says the drag coefficient has been cut from 0.29 to 0.28.

The much-rumored 6.6-kilowatt onboard charger will be an extra-cost option on the base model, but standard equipment on the two upper trim levels–as it is on the 2013 Ford Focus Electric. It reduces the charging time for a fully depleted battery from seven hours to about four, using a Level 2 charging station.

The onboard charger in all 2013 Leafs has also been reduced in size and relocated to a new position under the hood, which increases cargo volume by removing the “charger hump” found on the load-bay floor on earlier cars.

Nissan is offering a new and optional hybrid heater that cuts energy consumption compared to the electric resistance heater used on 2011 and 2012 Leaf models.

Three trim levels in the US

The new base trim level is called the Leaf S model. It replaces the LED headlights with less expensive projector beams, and uses 16-inch steel wheels with plastic covers rather than alloy wheels.

It also loses both the navigation system and the remote connectivity that allows drivers to turn on the climate control and monitor battery charging remotely using a smart phone.

The Leaf S offers an optional rear-view camera that displays on the smaller display screen in the center stack. The 6.6-kW charger is optional as well.

The middle trim level, the 2013 Leaf SV, rides on 16-inch alloy wheels and offers the LED headlamps and running lamps as an option.

The top-range trim level, the Leaf SL, adds a number of new standard features, including leather seats and a new design for its 17-inch alloy wheels. It features the LED headlamps as standard equipment.

There is talk of Leaf production moving to the Nissan plant at Sunderland. Nissan has yet to confirm this and has to announce a price for the expected lower cost 2013 UK model.  Some are expecting a price of around £22 thousand.