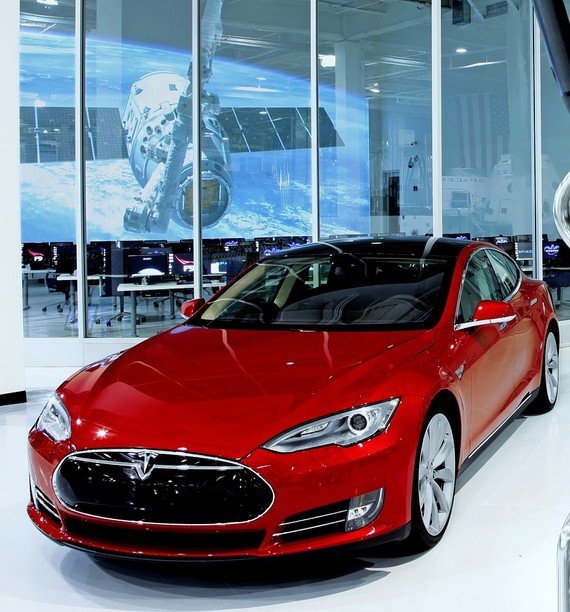 Last week on May 8th, Tesla published its 1st Quarter results, announcing a profitable quarter for the first time ever in the company’s ten year history. In a very easy to read letter to shareholders, the company announced a profit of $11.2 million, along with record sales of $562 million – up 83 percent over the prior quarter.

The better-than-anticipated performance was on sales of 4,900 vehicles in Q1 which exceeded expectations by four hundred units, while the company’s outlook for 2013 predicts sales of 21,000 vehicles globally – an increase of thousand units over previous projections.

In a time when electric vehicle startup companies such as Fisker and Coda are either bankrupt or heading that way, Telsa’s performance is a shining light for the entire EV industry. But it should be noted however, that overall financial performance was enhanced by a couple of extraordinary factors in Tesla’s favour which together combined to tip the quarter into profitability.

The first factor was a one-time non-cash gain of $10.7 million from the elimination of a Department of Energy “warrant liability” – without which, Tesla’s GAAP profit of $11.2 million would instead have been reduced to a net income of just $556,000. Still, Tesla points out, the company was nonetheless profitable without this gain, which is good, since it won’t recur.

But, an even bigger financial boost came from the second extraordinary, and ongoing factor – the sale of zero emissions vehicle (ZEV) credits, which amounted to $68 million for the quarter. Prior to the Q1 results, The Los Angeles Times reported that ZEV credits could be worth $250 million for Tesla for the whole year, so the confirmed Q1 figure of $68 million suggests that number could be about right when pro-rated over the year.

Since this constitutes 12 percent of the total Q1 revenue, and doesn’t come from selling vehicles, it’s interesting to consider how long Tesla can expect to benefit from this important revenue stream. Here’s how it works.

Several years ago, the California Air Resources Board (CARB) introduced regulations aimed at improving air quality that mandated a zero emissions vehicle requirement on large auto manufacturers doing business in the state. The regulations are pretty complex, but in the simplest terms, they require a certain percentage of vehicles sold by each car company in California to be zero emissions vehicles. Auto companies must either comply by selling their own ZEVs to account for the required percentage of sales, or pay a fine of $5,000 per ZEV “not-sold.”

A third available option for auto manufacturers is to buy ZEV credits from companies such as Tesla. Since Tesla builds ZEVs exclusively, they accumulate ZEV credits which are essentially a surplus to their own requirements, allowing them to sell them to non-compliant car companies instead. Depending on a vehicle’s zero-emissions-only range, multiple credits may be generated per each single vehicle sale, so for example, a zero-emissions vehicle with a range of 200 miles yields five ZEV credits.

The value of each credit sold isn’t transparent, but if the penalty otherwise paid to the state is $5,000 per non-ZEV-compliant vehicle, the ZEV credit value will be somewhere south of this figure. Still, whatever the specifics, since Tesla made $68 million from ZEV credits on sales of 4,900 vehicles, that equates to close to $14,000 per car.

Without doubt it is a pretty attractive windfall for Tesla, but then again, it was designed to be. The lucrative incentive was created by California to help EV companies get off the ground – while striving to achieve air quality improvements. But how do ZEV credits sales factor into the company’s future health? And can Tesla survive without them? After all, as other car makers produce EVs of their own, over time, the value of the credits will drop.

Tesla appears not to be banking on this fortuitous arrangement for the long-term. Additionally, as the company expands its out-of-state sales, the benefit will fall over a diminishing proportion of vehicles sold. The May 8th letter to shareholders indicates Tesla is bullish on their ability to do business without relying on ZEV credits. They advise that whereas their gross margin was 17 percent in Q1, this is projected to rise to 25 percent in Q4, assuming NO ZEV credit revenue. Of course, they will no doubt continue to realize revenue from sales of ZEV credits, but it’s smart of the company not to count on it to prop up business forever.

Still, without these extraordinary factors combined, Tesla would not have returned a profitable quarter, so there will be plenty of analysts who’ll say that without the $10.7 million DoE gain, and the ability to sell ZEV credits, Tesla’s underlying business is less convincing. But, other indicators do show improved health at Tesla. Vehicle sales have beaten expectations (unprecedented in the electric vehicle world); while vehicle build time has been reduced by 40 percent and improvements in inventory and logistics management has contributed $30 million in cash in the first quarter.

In any event, the company is off to a strong start in 2013, with management focused on expansion, and let’s not forget the strength of the product itself which has barely missed a beat since its introduction. Last week, Consumer Reports gave the Model S its top rating – establishing the car as not just a good EV, but an outstanding automobile of any stripe. No doubt, Tesla is not out of the woods yet, but in a notoriously difficult industry to break into, they are proving to be the best case for the electric vehicle yet.

Apple to use staff to test Self-Driving Vehicles