Tesla have a problem with how to ramp production of the Model 3. Since the first showing on March 31st this year Tesla has been swamped with orders that may well be over 500,000 by now. 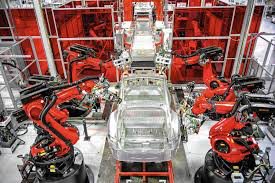 In order to bring production in line with market demand Tesla have hired Audi manufacturing guru Peter Hocholdinger.
According to the company’s statement on Friday afternoon:

Hocholdinger replaces Tesla’s outgoing vice president of production, Greg Reichow, who is taking a leave of absence for what a company spokesperson called “a well-deserved break.”
Hocholdinger’s main task will be to prepare the company’s assembly plant in Fremont, California, for high-volume production of its upcoming 200-mile Model 3 sedan, which is scheduled to go into production before the end of 2017.
He will have his work cut out for him: Tesla CEO Elon Musk said on the company’s quarterly-earnings call last week that it had pulled forward its date for achieving a production rate of 500,000 cars a year from the end of 2020 to the end of 2018, less than three years hence.
By comparison Tesla Motors delivered slightly more than 50,000 vehicles in 2015. To ramp to 500,000 car per yeas represents an order of magnitude increase in productiuon. Peter will be a busy man.