A new report from Cambridge Econometrics looks at the Climate Change Act and the effect on greenhouse gas emissions.
Cambridge Econometrics (CE) was commissioned by WWF-UK to assess the impacts of climate change mitigation measures on UK households, businesses and the macro-economy. MDM-E3, CE’s econometric model of the UK economy, energy system and environment, was used to model the impacts of taking measures to reduce greenhouse gas emissions in the power sector, buildings, transport, industry and agriculture.  The analysis shows that investing in energy efficiency measures and low-carbon technologies in order to meet the fourth carbon budget will lead to the creation of 190,000 jobs and a small increase in GDP (1.1%), relative to a scenario in which no further action is taken to decarbonise the UK economy. The report was launched at an event in the Houses of Parliament with a response by Ed Davey, Secretary of State for Energy and Climate Change.
The report is available here. 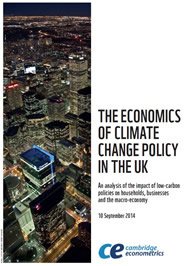 Households will be more than £500 a year better off by 2030 if the UK meets targets to cut emissions in the next 15 years, experts estimate.
Analysis suggests that meeting the first four “carbon budgets”, a series of five-year goals that require emissions cuts of around 60% on 1990 levels by 2030, will give a net boost to economic output of 1.1% and create an extra 190,000 jobs.
The average household will be £565 a year better off as a result of energy efficiency in the home, lower running costs of more efficient cars and increases in wages and jobs due to significant investment in low carbon technology and services.
Moves to cut carbon from the power sector, transport, homes and businesses will also reduce imports of oil and gas by £8.5 billion a year by 2030, t he study by Cambridge Econometrics in collaboration with Paul Ekins of University College London said.
It will increase Government revenues by £5.7 billion a year by 2030 due to a stronger economy and improve the UK’s energy security, the research for environmental charity WWF-UK showed.

The reductions in emissions from road transport alone could reduce healthcare expenditure by between £96 million and £288 million a year by 2030, the report said.
The first four carbon budgets recommended by government advisers the Committee on Climate Change, which run up to the end of 2027, require a range of measures including slashing emissions from the power section by 90% by 2030.
Continued energy efficiency improvements are needed, along with the insulation of 3.5 million solid walls, 60% of new cars must be hybrid or electric vehicles and 25% of homes should have heat pumps, the CCC says.
The analysis by Cambridge Econometrics suggests that energy bills will be slightly higher – some £22 – if the four carbon budgets are met, compared to taking little action.
Bills will be pushed up by higher electricity prices, as a result of investing in low carbon technology such as wind farms, and the costs of energy efficiency measures, but savings will be made as homes and products are more efficient.
Overall, however, households will be hundreds of pounds better off as a result of more jobs and higher wages, lower running costs of cars and slightly lower food prices from cost-effective measures to cut emissions in agriculture, the report said.

The analysis does not include the benefits to the UK of exporting low-carbon goods and services to other parts of the world.
Professor Ekins, professor of resources and environmental policy at UCL, said: “This report reflects a robust piece of work carried out by some of the UK’s best macro-economic modellers, using one of the UK’s most scientifically validated models.
“Its results are very interesting, suggesting that by 2030 the UK can be made better off in terms of GDP and employment by meeting the carbon reduction targets recommended by the Committee on Climate Change and accepted by the Government, than if it had not tried to do so.”
Nick Molho, head of climate and energy policy at WWF-UK, said: “Economists and business leaders have long stressed that minimising the impacts of climate change is crucial to guaranteeing the future health of our economy.
“But this report goes a step further and shows that building a low-carbon economy would in itself, produce net economic benefits for the UK.
“Meeting our carbon budgets and doing so in a way that maximises economic benefits for the UK and provides the necessary support to vulnerable parts of society should be a priority for the next Government.”
Industry body RenewableUK’s director of policy, Dr Gordon Edge, said “The economic benefits of investing in wind, wave and tidal energy are indisputable – more than 34,000 people already work in these sectors in the UK, in direct and indirect full-time jobs – and our studies show that this could rise to just over 100,000 by 2023 with the right level of Government support.
As this new report notes, one of the key factors which will determine whether UK plc reaps these rewards to the full is the pressing need for MPs to think long-term and introduce policies which chart a course up to 2030 and beyond to attract vital investment.”
Such a move would create higher levels of employment and better wages, outweighing the cost of a move from fossil fuels to renewables, as well as giving the UK more control over energy costs by making bills less volatile, he suggested.
A spokesman for the Department of Energy and Climate Change said: “The Government’s programme for making UK homes more energy-efficient and decarbonising electricity generation will save households money, make our energy supplies more secure and reduce greenhouse gas emissions.
“Through programmes such as ECO and the Green Deal, the UK’s housing stock is becoming more energy-efficient while the Electricity Market Reform is creating the conditions to attract investment in renewable and low-carbon generation.”