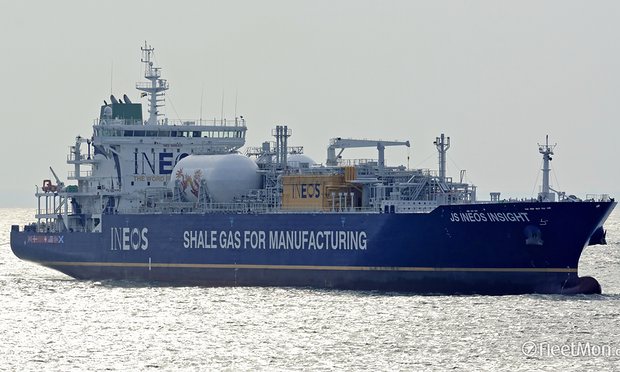 Today the first boat load of LNG arrives in Scotland on route to Ineos for the manufacturing of various petrocmeichals. Igenos will take delivery of a tanker full of ethane at its Grangemouth plant in Scotland, marking the first fruit of a $2bn investment.
The imports are due to replace dwindling supplies from the UK’s North Sea reserves.
The gas has travelled more than 3,500 miles via a “virtual pipeline” of eight tankers to reach Grangemouth, where Ineos has built an import terminal as part of an overhaul costing £450m. The ethane will be fed into “crackers” that convert the gas into ethylene, used in the production of a range of plastic products.

“Shale gas can help stop the decline of British manufacturing and today is a first step in that direction,” said Ratcliffe.

Although Ineos has begun importing from the US, where an abundance of shale gas has left the world’s largest economy with more than it needs, it would like to become the leading player when fracking takes off in the UK.
Ineos, which slashed its tax bill by moving its headquarters to Switzerland in 2010, was awarded 21 new licences in December, including sites in North Yorkshire, the north-west and east Midlands.
The awards increased the area of land over which it holds licences to 1m acres, nearly twice the area of the Yorkshire Dales national park.
But Ineos’s ambitions have been curtailed by slow progress in obtaining planning permission, which is necessary before it can exploit the licences.
A spokesperson for Ineos said earlier this year that it hoped to have 30 planning applications lodged before the end of the year but the company has since scaled back its plans to five, followed by a further 25 over the next 12 months.
Gas in the US is roughtly a third of the price in the UK and the rest of Europe. For us to remian competitive we need to get Fracking now or see more closures as chemical and industrial firms leave Europe for the US or the Middle East.

Need to know your Gas types:

Read our handy guide below to help you sort your coal bed methane from your LNG.

Natural gas:  Natural gas is a major energy source around the world, accounting for  21 per cent  of the world’s energy supply in 2010. Natural gas is an odourless, colourless gas, largely formed over millions of years underground. It’s made of a variety of compounds (see below), but methane is by far the most significant.

Natural gas is a fossil fuel, releasing greenhouse gases when burnt – but is less climate-polluting than coal, releasing about half of its carbon emissions. Unconventional gas: Unconventional natural gas is trapped in deep underground rocks that are hard to reach, such as shale rock or coal beds. Recent technological advances have made it possible to get these new sources of energy out of the ground.

Shale gas: Shale gas is extracted from shale rock using fracking, or hydraulic fracturing, of the rock. Shale rock is very common; the BGS estimates it makes up 35 per cent of the world’s surface rocks. It also suggests there are 1,300 trillion cubic feet of shale gas in the north of England.

The application of the fracking process – which has been used in the oil industry since the mid nineteenth century – to shale gas extraction has the potential to bring about a “a sweeping transformation” of the energy system around the world, according to the International Energy Agency, as different countries develop the resource.

Methane: In the shale gas debate, commentators sometimes make a distinction between natural gas and methane. In fact, as the chart above demonstrates, natural gas mostly is methane.

When it’s released directly in the atmosphere – rather than being burnt – methane is a powerful greenhouse gas. It is approximately 25 times more climate-polluting than carbon dioxide over a 100-year timescale. Some academics are worried that methane leaks during the fracking process – so called fugitive emissions – will significantly increase the impact of fracking on the climate.

Liquified Natural gas (LNG): In order to feed the world’s demand for natural gas, the gas needs to be transported from where it’s produced to where it’s going to be consumed. But transporting gas is not that easy. LNG is created by cooling natural gas to -160ÂºC, creating a clear, colourless and non-toxic liquid, 600 times smaller than natural gas. The biggest exporter of LNG around the world is Qatar, which sends it around the world in enormous tankers.

Shale oil: Fracking can be used to get not just gas out of the rock, but oil. The US-based Energy Information Administration estimates that shale oil represents 10 per cent of the world’s crude oil resources. It’s not clear how much the UK has got. The British Geological Survey is working on a survey of the shale oil resource in the south of the country. But a spokesperson tells Carbon Brief it will be “several if not many months” before the report is produced.

Coal bed methane (CBM): Methane occurs naturally underground within coal reserves. It can be extracted using a variety of techniques. In comparison to shale gas, the amount of gas we might get from CBM seems to be fairly small – maybe around three years of UK natural gas supply, according to the British Geological Survey.