Lithium What is it?

Lithium or Li is a soft, silvery-white alkali metal, it is the lightest metal and the lightest solid element. Like other alkali metals, lithium is highly reactive and flammable. Where to find it: Li never occurs freely in nature, but only in compounds, such as pegmatitic minerals.
Lithium and its compounds have several industrial applications, including heat-resistant glass and ceramics, lithium grease lubricants, flux additives for iron, steel and aluminium production, lithium batteries, and most importantly lithium-ion batteries.

Demand from EVs and Stored Energy

EV global sales are currently around 0.85% market share, and are expect this to grow to around 5% market share by the end of 2020. That equates to an increase from around 774,000 sales in 2016 to around 4.5m sales globally in the year 2020. If we assume the average electric car will have a 50kWh battery then each car will require about 40kgs of lithium. So by 2020 4.5m cars will require 180,000 tonnes of lithium carbonate. Adding to this will be lithium demand from electric buses, electric bikes, and electric trucks. In 2016 China demand for electric buses was 115,000 units. China has over 200m electric bikes (as of 2014) that can be converted to lithium-ion batteries from lead acid. Of note the Chinese e-bike numbers increased 1,000-fold in the 15 years prior to 2014).

In 2016 energy storage installations grew 100% in the US. Lithium-ion batteries represented at least 97 percent of all energy storage capacity deployed in 2016. China plans to raise its power storage capacity by ten-foldto 14.5 gigawatts by 2020 (from 2016 levels). Citigroup forecast that the global energy storage market will be greater than $400 billion by 2030 from around 130m in 2015, or a growth of a staggering 3,077 fold in just 15 years. These figures are excluding car batteries. Energy storage has the potential to overtake lithium demand for EVs.

Lithium supply is increasing slowly due to difficulties in creating a new mine. Supply should be able to keep up with demand with some short periods of both undersupply (2016/2017) and oversupply (2019) based on my model forecasts. This should ensure that the lithium price remains mostly above US 10,000/t for lithium carbonate. The current contract prices are between US$10,000-15,000, with spot and lithium hydroxide prices higher especially in China.

Where does Lithium come from?

An Australian company Orocobre is a major player and they project solid growth in demand. See Orocobre site and produce this handy graph 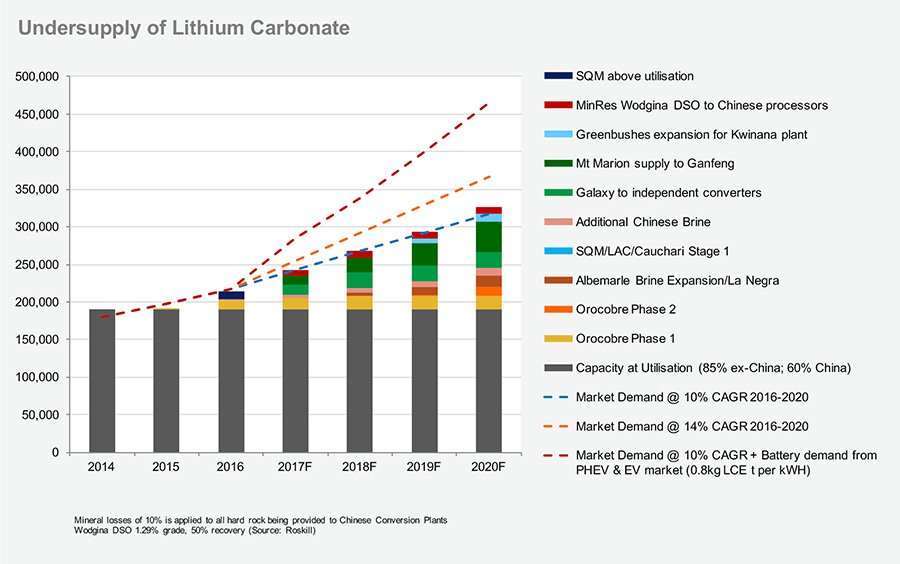 Which stock to own?

Lithium producers are a small bunch or small cap miners, an asset class not know for its stability and openness. Tread carefully!
The top five are:

I choose Albemarle in my top 5 as they have world-class lithium assets and are the global leader in lithium production (with Sociedad Química y Minera de Chile (NYSE:SQM)), currently producing around 65ktpa of lithium carbonate equivalent (LCE). That production volume represents about 30% of the lithium supply globally, making Albemarle a lithium superpower. Whilst not a pure play lithium miner they are quickly increasing their percentage of both revenues and net income from lithium (currently 17.7% of their revenues and 27% of net income). Importantly I expect Albemarle to achieve stronger lithium pricing contracts going forward as they have lagged their peer in pricing until now. Added to stronger pricing is a rising production profile going forward as they expand both Atacama (Chile) and Greenbushes (Western Australia). Both of these mines are currently the lower cost leaders for brine and spodumene respectively. They also have the only producing lithium mine in America, albeit a small lower grade production from Silver Peak in Clayton Valley Nevada (not too far from the Tesla gigafactory). Their other revenue comes from a wide variety of other chemicals (bromine), petroleum refining, packaging, transportation, pharmaceuticals, and crop production. This adds some diversification to their ever-expanding revenue streams.

Orocobre are an Australian lithium miner with their flagship project being the Olaroz lithium brine mine in Argentina, where they hold a 66.5% interest, and are the operator.

I choose Orocobre as they are currently very well priced after recent heavy falls due to missing their FY 2017 production targets. I also like that they are a pure play lithium brine low-cost producer, with plans to double production in the next 2-3 years, as well as expanding with a lithium hydroxide plant in Japan. Due to missing production targets the market is very down on the stock right now, which I feel is overdone. Orocobre do have several ex-SQM employees onboard so they should be able to correct their teething production issues with their ponds and plant.

Galaxy is chosen as it is a current producer with a rising production profile. They have 3 lithium projects on 3 different continents and are diversified across brine and spodumene. Management under Anthony Tse are doing an excellent job.

Mt Cattlin (Australia) lithium spodumene mine is currently producing around 14kt per month (targeting 160ktpa in 2017) of spodumene and set to ramp to nameplate of around 250ktpa assuming they can achieve strong lithium recoveries and low mica (lithium waste) content. So far things are looking very good. Off-take for 2017 is locked in at US$905/t for 6% spodumene, making Mt Cattlin a cash cow, that will almost entirely fund their Argentina project capex (along with some debt funding). The mine is 100% owned by Galaxy.

Sal de Vida (Argentina) is a very large, world-class, low-cost, lithium brine asset owned 100% by Galaxy. This is their flagship project. Resource size is excellent with a total indicated, measured and inferred resource of 7.223mt LCE at 753 mg/L. This makes Sal de Vida one of the largest LCE resources globally. Chemistry is excellent with very low magnesium and low sulphate concentrations. This helps to lower the cost of production.

I choose Lithium Americas in my top 5 as they are currently a very well valued junior, largely de-risked, and a likely producer (with SQM JV) by 2019. Lithium Americas own 50% of the their Cauchari-Olaroz lithium brine project in Argentina, with 50% partner SQM. The asset is world-class and Cauchari-Olaroz is the 3rd largest lithium brine deposit in the world (see chart below and red dot). Their 2012 NI 43-101 compliant resources for Cauchari-Olaroz were an indicated 8.7 million tonnes lithium carbonate at a lithium grade of 666 mg/L. Impurity levels are relatively low, with potash as a valuable bi-product.

I choose Lithium X as they have 2 quality brine assets in Argentina, some Clayton Valley brine, a brilliant managing director in Paul Matysek, and are extremely well valued in my view. Higher risk than those discussed above, but also higher reward.

The two Argentine salars are the Sal de Los Angeles (SDLA) and the recently acquired Arizaro salar. Both are owned 100%. At Sal de Los Angeles they are currently working on their PFS and pilot ponds, with plans to do their FS in Q1 2018, then full production of 15ktpa by Q2 2019. They are planning to move very fast indeed, working on several projects concurrently.

In their historical 2011 PEA (not to be relied upon) for Sal de Los Angeles, based on very low lithium carbonate prices of USD 5,000/t, the pre‐tax 8%NPV estimate was US$964 million, along with a pre‐tax IRR of 36%. However at $8,000-10,000/t, the corresponding pre-tax NPV8 would range between $1,450M and $1,850M. Given the current market cap of a mere US$88m, the stock has enormous upside potential. I don’t believe the market has reacted to the recent Arizaro purchase, and does not yet see the huge potential. Matysek commented that the their two Argentine salars could share the one processing plant which is another big factor not yet appreciated by the market.

Their director Paul Matysek has taken several start-up mining companies from nothing to something special (multi-million dollars) within short time frames, and has an incredible track record of success.

One more to consider:

Advantage Lithium is a micro-cap stock. Micro-cap stocks have market capitalizations between 50 and 300 million. The big risks with Micro-cap stocks is the lack of information available, possible bankruptcy, and low liquidity. Warning: It is possible that you will lose your investment on these stocks.

An updated resource estimate and PEA (Preliminary Economic Assessment) is due Q1 2018. Updates with drill results are also expected every few weeks through early 2018. These catalysts will be good for the stock price. Advantage Lithium’s resource is now estimated at .47MT LCE, and I see that resource estimate increasing a minimum of 7X, to 3.4MT. Please see the analysis later in this article on how this was calculated.

Orocobre has a fully operational lithium brine operation bordering Advantage Lithium’s property to the north. Orocobre owns a 35% stake in Advantage Lithium and is assisting in the development of their property.

Advantage’s board includes the CEO of Orocobre, Richard Seville, who brought Orocobre from a lithium exploration company to a fully operational lithium producer. Orocobre’s exploration manager Miguel Peral is also on Advantage’s board. He explored the resource at salar Olaroz, which Orocobre now is producing from.

Advantage CEO, David Sidoo explained the importance of this partnership in a recent interview:

Through our relationship with Orocobre we also have access to all the information they have about Cauchari as they have had a drilling presence there…Their technical knowledge is very important for us when it comes to deciding where we’re going to drill, what drilling contractor we use and other such things. That’s invaluable. Their knowledge in community relations and the technical knowhow for sourcing the brine and obtaining the lithium carbonate equivalent of 99.9 percent is very important. These guys have done it all before, and that background knowledge is invaluable when you’re looking at investing in a company that wants to be a new producer of lithium.

Because the lithium brine on Advantage’s property is of similar makeup to its neighbors, Advantage has the option to connect to Orocobre’s facility at Oraloz with a pipeline to start producing. The same should be possible with the Lithium Americas facility that is now in development, and also borders Advantage’s property. What this means is Advantage may not need to build their own production facility to become profitable; the biggest hurtle to overcome for a lithium exploration company. Instead of 400 million and 5 years to make a profit, they can spend 5 million and make a profit in 2019.

Interesting times for Lithium and investing in Li.