Chargers with up to 350kW charging capacity could be installed in 50 motorway locations.

The National Grid has pitched a network of 50 electric vehicle charging stations with a capacity of up to 350kW across England and Wales, along with a similar network in Scotland.

The Financial Times reports that the company, which runs the UK’s electric grid, has looked into the possibility and has found that strategic placement of the chargers on UK motorways would put 90% of drivers within 50 miles of a charger.

“We want to show that infrastructure needn’t be a barrier. This is not about National Grid charging vehicles, but National Grid enabling the charging to happen. Range anxiety is consistently given as a major reason as to what deters consumers from buying EVs and we have a solution that addresses this,” said a National Grid spokesman.

The 350kW chargers could result in EVs being charged in as little as five minutes, depending on battery size and on board charger capacity. They could also match the demands of hungrier EVs that are on their way shortly; these can only achieve their headline-grabbing recharging times with higher-capacity chargers than those currently installed in the UK. 50 individual chargers are planned for each charging station, meaning 100 chargers when considering both directions of travel.

The chargers would be wired directly into the high-voltage electricity transmission network itself, rather than local grids, dispelling concerns of higher-capacity EV chargers leading to power shortages in more under-strain areas. There are no plans for the National Grid to run the chargers, so the price to charge at one of the points will be decided by the eventual owners of each station. It’ll cost between £500 million-£1 billion to install the network at current prices, however this is likely to come down as technology advances, said the Grid spokesman.

“If you overlay the motorway network over the transmission network, there is a synergy. The electricity transmission network runs close to motorway network and likely to be most efficient connection at many sites. In terms of how you space rapid chargers; 50 miles was used in the autonomous vehicles bill. When we mapped England and Wales with the grid, 90% of people using network would be within 50 miles of a rapid charger,” said the spokesman. “We think the rollout of the charging points should be structured and co-ordinated. Rather than connecting one customer at a time and having a piecemeal approach, provide the infrastructure in a co-ordinated way. Our solution is about future proofing; not just for cars but for light goods vehicles and trucks in the future.”

Chargemaster is currently working on the implementation of 150kW chargers for the UK, although these aren’t due until next year. As the Government ramps up plans to make EVs the go-to choice amid air quality and European Union CO2 targets, EV charge points will soon become mandatory at all large petrol stations and motorway services.

Matthew Trevaskis, head of electric vehicles at the Renewable Energy Association, said: “This is an important milestone for the development of a strategic, accessible, and reliable electric vehicle charging network in the UK. National Grid will play an increasingly crucial role in EV rollout and it is excellent to see some big-picture thinking from them on this issue. It is now up to Government and regulators to build on the excellent work done to date and to implement documents such as the Smart Systems and Flexibility Plan.”

This is the sort of commitment we need to start the planning for the big picture when EVs have larger battery packs and the ability to accept fast charging. Tesla is the industry leader with the SuperCharger network of priority charging station. These are what are commonly called Level 3 chargers and operate at 120 Kw at peak rates. This lets a base 60 Kw Tesla Model s charge to full in around half an hour. 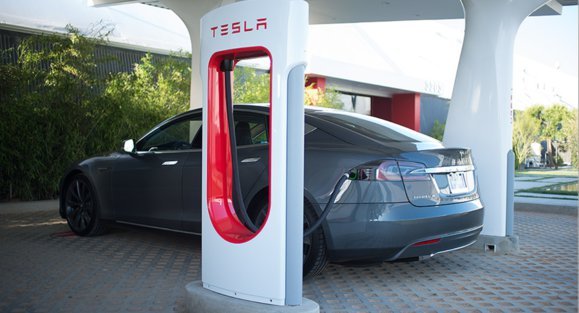