Interesting report from Bloomberg that predicts the end of the increasing demand for fossil fuels let by a change in  the fuels used to generate electricity.

The way we get electricity is about to change dramatically, as the era of ever-expanding demand for fossil fuels comes to an end—in less than a decade. That’s according to a new forecast by Bloomberg New Energy Finance that plots out global power markets for the next 25 years.

Call it peak fossil fuels, a turnabout that’s happening not because we’re running out of coal and gas, but because we’re finding cheaper alternatives. Demand is peaking ahead of schedule because electric cars and affordable battery storage for renewable power are arriving faster than expected, as are changes in China’s energy mix.

Since 2008, the single most important force in U.S. power markets has been the abundance of cheap natural gas brought about by fracking. Cheap gas has ravaged the U.S. coal industry and inspired talk of a “bridge fuel” that moves the world from coal to renewable energy. It doesn’t look like that’s going to happen.

The costs of wind and solar power are falling too quickly for gas ever to dominate on a global scale, according to BNEF. The analysts reduced their long-term forecasts for coal and natural gas prices by a third for this year’s report, but even rock-bottom prices won’t be enough to derail a rapid global transition toward renewable energy.

“You can’t fight the future,” said Seb Henbest, the report’s lead author. “The economics are increasingly locked in.” The peak year for coal, gas, and oil: 2025. 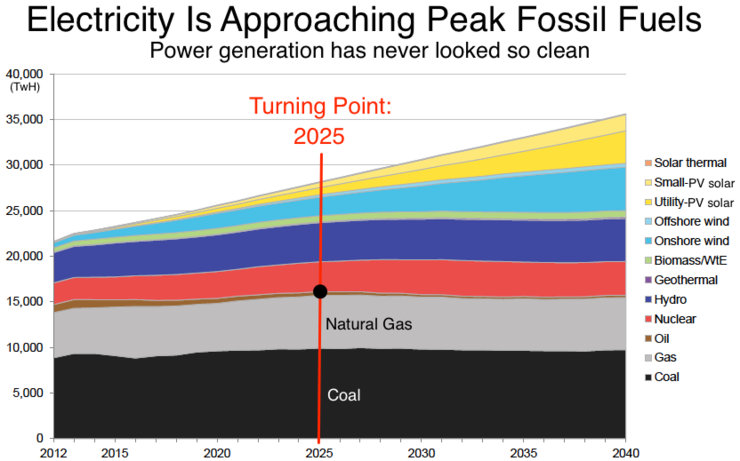 Humanity’s demand for electricity is still rising, and investments in fossil fuels will add up to $2.1 trillion through 2040. But that will be dwarfed by $7.8 trillion invested in renewables, including $3.4 trillion for solar, $3.1 trillion for wind, and $911 billion for hydro power.

Already, in many regions, the lifetime cost of wind and solar is less than the cost of building new fossil fuel plants, and that trend will continue. But by 2027, something remarkable happens. At that point, building new wind farms and solar fields will often be cheaper than running the existing coal and gas generators. “This is a tipping point that results in rapid and widespread renewables development,” according to BNEF.

The pink stuff on the top of this chart is new this year. It represents flexible capacity—technology, primarily large batteries for the home and grid, that smooths out the peaks and valleys inherent in wind and solar power. By 2028, batteries will be as ubiquitous as rooftop solar is today.

In this discussion of peak fossil fuels, the focus is on electricity generation, not transportation fuels. For cars, peak oil demand will take a bit more time. But the sudden rise of electric cars is on the verge of disrupting oil markets as well, and that has profound implications for electricity markets as more cars plug-in.

In fact, electric cars couldn’t come at a better time for developed economies. Take Germany, where increases in efficiency mean that without electric cars, demand for electricity would be headed toward a prolonged and destabilizing decline. Electric vehicles will reverse that trend, according to BNEF.

The charts below show the soaring demand for battery capacity for cars and the difference that EVs will make to power demand worldwide. The adoption of electric cars will vary by country and continent, but overall they’ll add 8 percent to humanity’s total electricity use by 2040, BNEF found.

The scale-up of electric cars increases demand for renewable energy and drives down the cost of batteries. And as those costs fall, batteries can increasingly be used to store solar power.

The chart below is arguably the most important chart in energy markets. It describes a pattern so consistent, and so powerful, that industries set their clocks by it. It’s the beautiful math of declining solar costs.

The chart is on a logarithmic scale, so the declines are even more profound than at first glance. For every doubling in the world’s solar panels, costs fall by 26 percent, a number known as solar’s “learning rate.” Solar is a technology, not a fuel, and as such it gets cheaper and more efficient over time. This is the formula that’s driving the energy revolution.

Wind-power prices are also falling fast—19 percent for every doubling. Wind and solar will be the cheapest forms of producing electricity in most of the world by the 2030s, according to BNEF.

One of the fast-moving stories in renewable energy is the shift in what’s known as the capacity factor. That’s the percentage of a power plant’s maximum potential that’s actually achieved over time.

Consider a wind farm. Even at high altitudes, the wind isn’t consistent and varies in strength with the time of day, weather, and the seasons. So a project that can crank out 100 megawatts of electricity during the windiest times might produce just 30 percent of that when averaged out over a year. That gives it a 30 percent capacity factor. 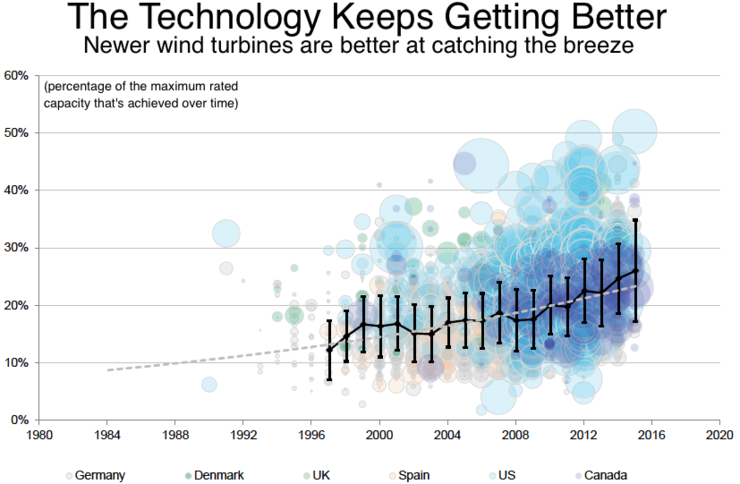 Improving capacity factors make renewables more attractive. But capacity factors of gas and coal plants are also changing. Once a solar or wind project is built, the marginal cost of the electricity it produces is pretty much zero—free electricity—while coal and gas plants require more fuel for every new watt produced. If you’re a power company with a choice, you choose the free stuff every time.

As natural gas and coal plants are increasingly idled in favor of renewables, their capacity factors will take a big hit, and lifetime cost of those plants goes up. Think of them as the expensive back-up power for cheap renewables.

China, the biggest and fastest-growing polluter, became a major global environmental concern over the past few decades. But that perception is changing fast. China’s evolving economy and its massive shift from coal to renewables mean it will have the greatest reduction in carbon emissions of any country in the next 25 years, according to BNEF. That’s good news for the climate and is a significant change for the global energy outlook.

But that leaves India, which is emerging as the biggest threat to efforts to curb climate change. India’s electricity demand is expected to increase fourfold by 2040, and the country will need to invest in a variety of energy sources to meet this overwhelming new demand. India has hundreds of millions of people with little or no access to electricity, and the country sits atop a mountain of coal. It intends to use it. 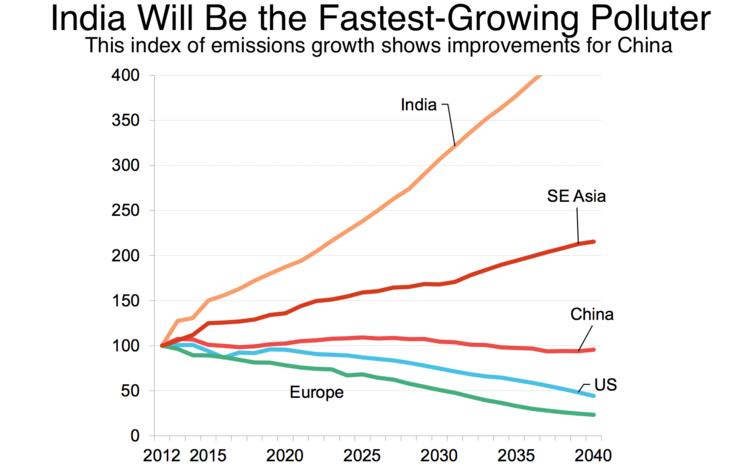 BNEF’s outlook for carbon dioxide emissions has improved significantly over the past year, in spite of cheap fossil fuel prices. The shift to renewables is happening shockingly fast—but not fast enough to prevent perilous levels of global warming.

Without additional policy action by governments, global carbon dioxide emissions from the power sector will peak in the 2020s and remain relatively flat for the the foreseeable future. That’s not enough to prevent the surface of the Earth from heating more than 2 degrees Celsius, according to BNEF. That’s considered the point of no return for some of the worst consequences of climate change.

BNEF’s report focuses on fundamental economics: price, demand, supply. It includes climate-related policies that have already been set into action but doesn’t make any guesses for new policies beyond those. It also doesn’t include any jumps in technology that aren’t clearly already under way.

That could be heartening for people concerned about climate change, because if there’s one thing that energy markets have shown in the past decade, it’s that there will be more surprises to come.

London to add £10 T Charge to dirty cars in October