It’s getting grim in the city of lights as Paris clamps down on traffic in a bid to curtail pollution.

The city restricted traffic in the for a second day after a “lid of pollution” sealed the capital, causing concern over public health. 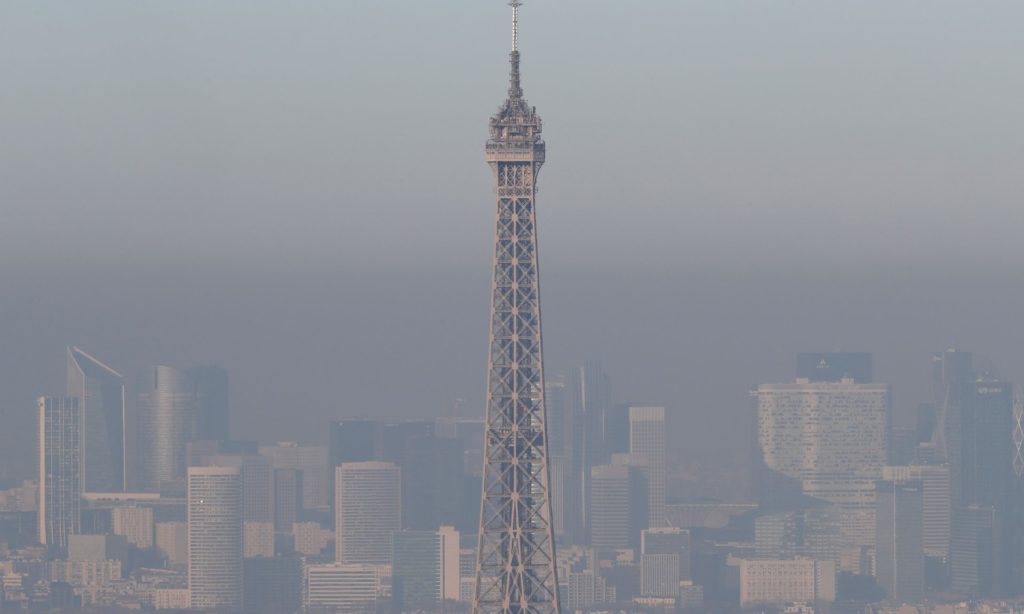 Photographs showed a grey veil of dirty air trapped over the city, masking the horizon and, at times, landmarks such as the Eiffel Tower. Experts said it was the longest most intense spike in pollution for at least 10 years and was expected to continue for at least another day if not longer.

Following a ban on vehicles with odd-number licence plates on Tuesday, it was the turn of those with even numbers to be told to leave the car at home on Wednesday. To encourage them, public transport in the city and suburbs was free. Drivers who ignored the ban aimed at cutting traffic were fined €22.

The alternate-day vehicle bans have only been introduced four times in the last two decades, and never before for two consecutive days.

“Without it the air would be even more polluted. It’s an emergency solution to an urgent problem,” Charlotte Songeur of Airparif, which measures air quality in the French capital, said.
She added: “Even before this, 1.6 million French people were breathing in a level of nitrogen dioxide over European recommended levels.”

High levels of pollutant gases and fine lead particles can cause asthma, allergies, breathing difficulties and heart diseases.
The Paris prefect, Michel Cadot, said the ban would be extended to a third day if air quality did not improve.
The spike in pollution was blamed on anticyclonic weather conditions, little wind combined with the cold snap keeping the pollution from escaping, and people turning up their gas heating or lighting fires.

“As long as the meteorological situation remains the same and emissions remain the same, we will not see the end of the pollution spike,” said Cadot.

The level of PM10 lead particles in Paris was higher than the recommended 80 micrograms per cubic metre several days last week.
However, because the alternating traffic rule is only introduced after four consecutive days of continuous high pollution – and the traffic level dropped at the weekend – it was not introduced on Monday, causing criticism of the authorities when the levels shot back up again. Air quality controllers also noted a jump in nitrogen dioxide levels from last Thursday.
The air quality was said to be bad in other French cities, including Grenoble and Lyon.
Sébastien Vray, president of the group Respire (Breathe), said there were 48,000 premature deaths in France each year due to air pollution. “It’s the third biggest cause of death, but politicians only react under the pressure of public opinion,” Vray told France TV Info.
“It’s now 40 years that we’ve had health problems linked to air pollution. Organisations measuring air quality give the same reports each year … what are we waiting for to bring in technological change? Our carmakers have known for the last 40 years they can improve their engines with increasingly efficient technology and the state must better inform the public to help them change.”
The mayor of Paris, Anne Hidalgo, who has made tackling pollution a priority, tweeted a photograph taken from an aircraft over the capital showing the city covered in a grey blanket, with only the top of the Eiffel Tower visible. “Proof of the necessity to reduce the place of the car in city centres,” she wrote.