Researchers from Nissan and its materials research subsidiary Nissan Arc have developed a heterostructure model of the atomic structure of silicon monoxide (SiO), which explains the distinctive structure and properties of the promising material that will aid in boosting the performance of lithium-ion batteries, and ultimately extend the driving range of zero-emission electric vehicles. 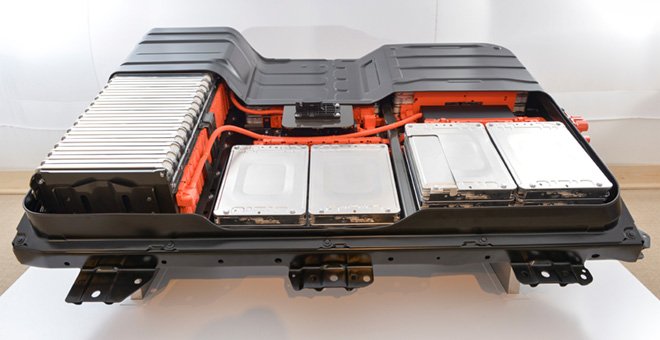 In “Atomic-scale disproportionation in amorphous silicon monoxide,” published in Nature Communications, Akihiko Hirata and colleagues explain that silicon (Si) is capable of holding greater amounts of lithium, compared to carbon-based materials, but that its crystalline form tends to deteriorate during charging cycles.
Silicon (Si) is capable of holding greater amounts of lithium, compared with common carbon-based materials, but in crystalline form possesses a structure that deteriorates during charging cycles, ultimately impacting performance. However, amorphous SiO is resistant to such deterioration.
Its base structure had been unknown, making it difficult for mass production. However, the new methodology provides an accurate understanding of the amorphous structure of SiO, based on a combination of structural analyses and computer simulations.
The atomic structure of SiO was thought to be inhomogeneous, making its precise atomic arrangements the subject of debate. The new findings show that its structure allows the storage of a larger number of Li ions, in turn leading to better battery performance.

“The invention of this new analysis method is essential to further develop the next generation of high-capacity lithium-ion batteries. It will certainly become one of our core technologies. The utilization of this analysis method in our future R&D will surely contribute to extending the cruising range of future zero-emission vehicles,” said Takao Asami, Senior Vice President of Nissan Motor Co., Ltd. and President of Nissan Arc Ltd.

Daniele Schillaci, Executive Vice President of Nissan Motor Co., Ltd., Global Sales & Marketing including Zero Emission Vehicle and Battery business, said the development was another proof point of Nissan’s commitment to innovation in advanced technologies.
“Nissan is exploring a wide range of energy sources for tomorrow’s vehicles, and we recognize our role in continuously investing in multiple technologies and intelligent mobility,” said Schillaci.
Amorphous SiO is resistant to such deterioration, but its base structure was not well understood before. The new methodology provides an accurate understanding of the amorphous structure of SiO, based on a combination of structural analyses and computer simulations.
Source Nissan.